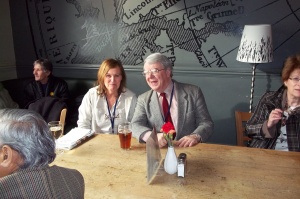 North Kensington residents and local Councillors met on 17 May in the North Pole pub to start the fight to stop Sainburys turning it into yet another outlet.

The cross-party team including Councillors Pat Healy and Bob Mingay from St Charles Ward, and Cllr Todd Foreman from Notting Barns where the pub is located, met a huge and angry group of local residents at the pub to kick off the campaign. Concerns range from the threat to other local convenience stores, loss of a highly valued local amenity, to increased parking problems from ‘drive-by’ shoppers. Various ideas were discussed and will be pursued: a petition to Council demanding they refuse a change of use class is being organised.

Cllr Foreman said “The North Pole pub is a landmark in North Kensington and its loss would be a huge blow to the community. To make matters worse, if the premises turned into yet another chain supermarket outlet then the survival of nearby small businesses would be threatened.”

Cllr Healy said : ‘I have been approached by many local residents and shopkeepers who are outraged at this threat to the community. The degree of anger was palpable at the meeting as scores of people crowded into the pub to have their say.’

Cllr Mingay said: ‘The loss of the last remaining pub in this part of the Borough to an unwanted supermarket would breach RBKC’s Core Planning Strategy. We will pursue every avenue in Planning Law to stop what local opinion clearly regards as an outrage.’ 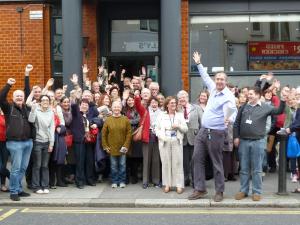 3 thoughts on “RESIDENTS RALLY TO SAVE THE NORTH POLE PUB”