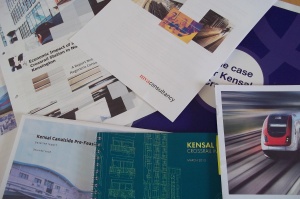 After an agonising waiting game, possibly millions spent on consultants’ reports, Council reports and countless hours of officer time, a long-predicted announcement has been made. There will be no Crossrail station at Kensal Gasworks. Council Leader Sir Merrick Cockell stated in a letter to supporters dated 26.4.13 that the station has no support from ‘either the Department of Transport or the Mayor of London’.

The Opposition Labour Group had been informed by inside sources as far back as May 2010 that it had been acknowleged privately that there was no chance whatever for a Crossrail station at Kensal Gasworks, a large brownfield site next to Ladbroke Grove Sainsbury’s. But the Conservative Group lambasted them for repeating this unwelcome news, and continued to push at the closed door of TfL and the Mayor’s office. Indeed, the Labour Group had been calling for a Plan B to be worked up by a cross-party working group as far back as March 2012. At the Council Budget meeting this year, labour Leader Councillor Judith Blakeman called for a feasibility study on a ‘21st Century Travel Plan’ including the possibility of a tram link between Kensal and the future transport super-hub at Old Oak Common. But once again the Labour Group was shouted down and the study refused.

Just two months ago, in line with Labour suggestions, a Kensal Working Group was finally established, and on 26 April Sir Merrick Cockell wrote to Crossrail supporters with the sorry news of the end of his Crossrail dream, mooting Labour’s suggestion of a link to Old Oak Common.

Labour Leader Councillor Judith Blakeman said: ‘While it is heartening that the Council has finally accepted the unwelcome truth we were told three years ago, it is a total disgrace that they have continued to pour money into a press campaign and countless consultants’ reports on a no-hope project. Now we have to start work on Plan B, and let’s do this consultation properly.’

Deputy Leader Councillor Emma Dent Coad, whose personal blog on Kensal Crossrail was the subject of a Motion to Council a year ago, said: ‘I estimate the Council has spent cc£1m on pointless reports, while Golborne, the joint poorest ward in London, is having services cut to ribbons. I will now be gathering all the Council and non-Council reports and putting them online for all to see; many of them are from community groups and students, and they include some cracking ideas that would create a fantastic community AND help improve the life prospects of our poorest residents, right here where they live, not in Dagenham or Peterborough.’

You have, in the past, been supportive of the Royal Borough of Kensington and Chelsea’s plan for a Crossrail station in Kensal. We have been engaged in campaigning for a station for several years, and we remain convinced of the impressive regeneration such a station would aid. I met with the Transport Minister Stephen Hammond MP, along with Sir Malcolm Rifkind MP, last week to discuss our proposals.

Unfortunately I have to tell you that at that meeting Stephen indicated our plans did not have the support of either the Department of Transport or the Mayor of London. The reasons for that lack of support remain frustratingly unclear.

On a more positive note, the Minister went on to say that that the Department of Transport would be glad to work with us on “alternatives” that might include some form of Heathrow-style monorail.

Clearly that is an intriguing idea but in the absence of any detail about what precise form the alternative would take, what capacity it would have, and crucially, when it would be built and where it would stop, it is impossible for us to make any sort of judgement about whether such a service would be a genuine alternative to a Crossrail station.

It follows therefore that the fight for our station must go on. I hope that I can count on your continuing support while we give this fight one more round. In particular I would ask that you use all your channels and influence to get our case heard as widely as possible. The economic and regeneration arguments for our station are as you know overwhelming. It there are genuine technical reasons why Londoners have to forgo those benefits, we believe those reasons should be spelt out so they can be scrutinised and solutions found.

If you want to discuss any of this further please do get in touch.

Leader of the Royal Borough of Kensington and Chelsea’