Kensington Labour is delighted to present its new team of Councillors, who made their first appearance at the RBKC Council AGM on 11 June, where former Whip Robert Atkinson was created Deputy Mayor.

Our senior Leadership team is looking forward to working as one with our new members, who bring a wealth of experience and knowledge into the Labour Group. All our hard work during the year-long election campaign has paid off, with a larger group bringing new energy and commitment. 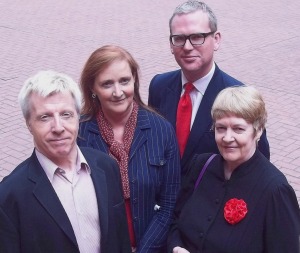 New Labour Group Leader Emma Dent Coad said: ‘I am very excited to be working with a group that we worked so hard to put together, so that we can better serve our residents. Through our time-consuming committee work, liaising with community groups, casework and campaigning, we will always do our best for our constituents. We never forget, we work for you.’