It’s only five years since the Council had to repay £750,000 for overcharged market waste collections. Now, the Portobello & Golborne Management Committee are claiming that market traders have been overcharged by a whopping £1.2 million for the collection of market traders waste over several years.

North Kensington Labour Councillors have today demanded that the Council carries out an urgent investigation into why the charging regime for Portobello and Golborne Road Market has gone so disastrously wrong for a second time, and into the conduct of the Council officers who the market committee claim have failed to act on their legitimate claims over a long period of time.

The Labour Group’s market spokesperson, Cllr Pat Mason said, “It’s utterly staggering that the Council could have robbed our market traders for a second time in five years, and especially now when they need every penny to survive. I have called for an urgent Council investigationto find out what has happened, who is responsible, and then heads should definitely roll”.

Labour Councillor Pat Mason has written to Planning Minister, Don Foster, to protest about the disastrous planning law changes he has introduced only a week after visiting Portobello Market that won the Best UK Market Award.

Kensington High Street, Notting Hill Gate, Ladbroke Grove and the Portobello and Golborne Road Market could be overrun with lines of betting shops, PayDay lenders, pawn shops and gambling premises after the government introduced new planning rules this week that removed the right of residents to be consulted about what happens in their locality.

From this week, Kensington and Chelsea Council and local people are now powerless to stop paper shops, cafes, restaurants, public houses, laundrettes and other independent shops being turned into betting shops and gambling premises. Local communities and the Councillors they have elected have been disenfranchised, whilst big business and developers can now set about wrecking fifty years of careful local planning, ruining the character of any area they choose in the process, and the government is allowing them to do it.

Labour Opposition Group Councillor Pat Mason said, “Tearing up our planning laws and axing our residents right to be consulted on what happens in their local area is utterly undemocratic and likely to ruin the character of Portobello and Golborne Market making it less attractive for visitors. The Tory-Liberal Democrat government has totally reneged on its promise to give local people more say in their local area, and to protect the character and economy of our borough. Shame on them for telling yet another lie”. 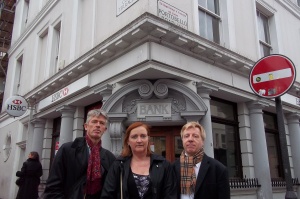 Following the closure of the HSBC Bank and their ATMs in Portobello Road last December that was bitterly opposed by Councillors, market traders, shops and local residents, North Kensington Labour Councillors worked hard to have the lost ATMs replaced. Colville Councillor, Dez O’Neill, has worked with HSBC, the Council and several local property owners to find alternative ATM sites. And Golborne Councillor Pat Mason contacted other banks and providers including British Telecom who operate the public telephone boxes on our streets.

The HSBC ATMs were used every weekend by thousands of visitors to the Portobello and Golborne Market. These visitors often needed cash for small sales it was not financially viable for traders to make by credit card. And Golborne Road visitors and traders have long complained that there is no bank and ATM facility there.

This week, British Telecom made planning applications to RBKC to replace their existing telephone boxes at Talbot Road and Golborne Road with new models that will include an ATM service.

Colville Councillor Dez O’Neill said, “This is welcome news since cash machines assist visitors to spend their money on Portobello and Golborne Market, and are very important for the local economy”.

Golborne Councillor Pat Mason said, “Visitors now have less money to spend because of the recession, and if putting these new ATMs on the market helps them to spend more, then that will be a good thing”.

HSBC agreed to keep cash machines on Portobello if site can be found .

At a meeting at Kensington Town Hall on 1st November, HSBC bosses have agreed that whilst they still intend to close the 152 Portobello Road Branch on 16th December, they will work with Labour Councillors, led by Cllr Dez O’Neill of Colville Ward, to find an alternative location for the ATM cash machines on Portobello Road that we said are so important for the local economy.

Cllr Dez O’Neill, Colville Ward, Cllr Emma Dent Coad, Deputy Leader of the Labour Opposition Group, and Labour Group Chair, Cllr Pat Mason, told HSBC bosses that it was wrong not to have consulted with Portobello and Golborne Road shops and market traders before deciding to shut the local bank. Councillors were enraged to learn that HSBC had been planning the closure for a year, but had failed to contact local Councillors.

Mark Barr, Chairman of the Portobello and Golborne Management Committee, who sent a statement to the meeting said:

“My committee represents shops, stallholders and residents, and the closure of this branch will be a devastating blow to the financial well-being of Portobello Road, Golborne Road and the surrounding area”. (The full statement will be forwarded).

Councillor Dez O’Neill said, “The cash machines are very important for visitors to Portobello, for traders and local people, and for the local economy, and I am going to work with HSBC to find a suitable location to keep them on the market”.