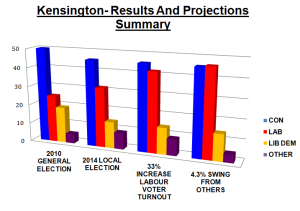 (left, our projection based on increased Labour turnout)

This very heartening article by Mary Dejevsky in today’s Independent backs up what we’ve been saying for quite a while – the gap is smaller than you think! In 2010 Kensington under Rifkind was 142nd safest Tory seat, but this slipped to 211st by October 2014, when Electoral Calculus predicted the following for May 2015:

While this has changed due to the plummeting support for UKIP, no poll can account for the tremendous amount of work carried out by Kensington Labour Action Teams and our wonderful and hard-working candidate Rod Abouharb.

If you and every Labour voter uses their vote on 7 May, we could win. It’s that simple.